Question: What is FRAD?

FRAD (Functional Requirements for Authority Data) is a highly theoretical, entity-relationship (E-R) model for authority data. Published in 2009 by the International Federation of Library Associations and Institutions (IFLA), FRAD extends and expands upon the FRBR (Functional Requirements for Bibliographic Records) model, a topic that was featured in a 2012 as a Cataloging Q&A.

“Authority data represents the controlled access points and other information that institutions use to collocate works by a specific person, family, or corporate body, or the various editions of a title. Controlled access points include authorized forms and variant forms of name assembled by cataloguers to identify an entity (Patton, p. 13).”

FRAD’s main function is “to provide a framework for the analysis of functional requirements for the kind of authority data that is required to support authority control and for the international sharing of authority data (Patton, p. 13).”

The FRAD model identifies and examines four tasks employed by users of authority data. They are:

There are sixteen FRAD entities on which authority data are focused. Included are the ten entities outlined in the FRBR model (i.e. person, corporate body, work, expression, manifestation, item, concept, object, event, place) plus six new entities (i.e. family, name, identifier, controlled access point, rules, and agency). Each entity is associated with its own prescribed set of attributes. “In FRAD, authority data collocates works by a person, family, or corporate body, or the various editions of a title, by providing the controlled access points and variant forms of a name (Jin, p. 2).”

Figure 1 illustrates the basic FRAD entity-relationship model. “Entities in the bibliographic universe (such as those identified in the Functional Requirements for Bibliographic Records) are known by names and/or identifiers. In the cataloging process (whether it happens in libraries, museums, or archives), those names and identifiers are used as the basis for constructing controlled access points (Patton, p. 19).” 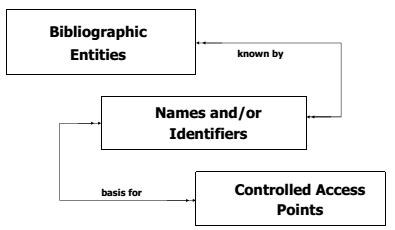 To illustrate the FRAD entities and their relationships in a potential real world situation, the following example is provided:  An individual is interested in finding the book The Girl with the Dragon Tattoo by Stieg Larsson in her library’s FRAD modeled, online catalog. After performing an author search, she would find the name authority heading for “Larsson, Steig, 1954-2004” in the online catalog. Clicking on the authorized name heading (i.e. access point), she may find the following attributes:

Clicking on the authorized title access point for The Girl with the Dragon Tattoo, the catalog would then display the variant Swedish title Män som hatar kvinnor along with “novel” and “2008” listed respectively under the attributes “form of work” and “date of the work” (Jin, p. 104-105).

Girl with the Dragon Tattoo

Both FRBR and FRAD provide the foundational structure for RDA (Resource Description and Access) cataloging standards. RDA’s utilization of these two E-R models aid in identifying relationships between a work and its creators as well as a work’s various editions and formats, and is guiding how RDA authorities are being created. This restructuring of data creates the potential of improved collocation and display of catalog information. To achieve this, our integrated library systems (ILS) need  to be compliant in establishing and displaying relationships between these various pieces of data. Several institutions have developed fully operational FRBRized systems (e.g. WorldCat.org, UCLA Film and Television Archive OPAC), while others have created experimental systems, algorithms or open source software to allow for FRBR implementation (e.g. OCLC FRBR Work-Set Algorithm, eXtensible Catalog (XC)) (Zhang & Salaba, p. 76-77).

Subject authority data is addressed in Functional Requirements for Subject Authority Data (FRSAD), another E-R model that expands upon the FRBR model. FRSAD will be covered in a future Cataloging Q&A.

For more detailed information on FRAD and FRBR, here are a couple of suggested titles for reading:

This site uses Akismet to reduce spam. Learn how your comment data is processed.